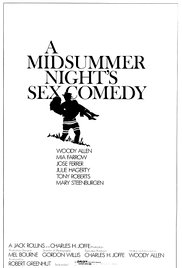 The plot is loosely based on Ingmar Bergman's SMILES OF A SUMMER NIGHT. It was the first of 13 movies that Allen would make starring Mia Farrow. Julie Hagerty, Mary Steenburgen, Tony Roberts and Jose Ferrer co-starred. It also marks the first appearance of Allen as an ensemble performer in his own film, as previously he had either been the lead character or did not appear in his films.

It is the early 1900s. Distinguished philosopher Leopold (Ferrer) and his much younger fiancée, Ariel (Farrow), are going to spend a weekend in the country with Leopold's cousin Adrian (Steenburgen) and her crackpot inventor husband Andrew (Allen). Also on the guest list is womanizing doctor Maxwell (Roberts) and his latest girlfriend, free-thinking nurse, Dulcy (Hagerty). Over the course of the weekend, old romances reignite, new romances develop, and everyone ends up sneaking off behind everyone else's backs.

Courtesy of Wikipedia, The Free Encyclopedia - A Midsummer Night's Sex Comedy Article (as of December 18, 2017)