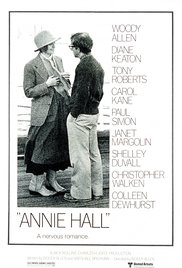 Woody Allen, a New York comic, tells of his long love affair with Diane Keaton, a Wisconsin girl he met at a tennis doubles match with actor-friend Tony Roberts. Allen encourages the awkward Keaton to become a polished singer and to obtain a better education as they have an affair. Woody describes his childhood life at Coney Island, his psychiatric sessions, his two failed marriages, to campaign worker Carol Kane and author Janet Margolin, and his problems with sex, particularly regarding Keaton. Despite a genuine love, he and Keaton are unable to maintain a satisfactory relationship. Her relatives, including mother Colleen Dewhurst and brother Christopher Walken, are either bigoted or strange.

After a breakup, Keaton asks for another chance as Allen leaves bedmate Shelley Duvall, a Rolling Stone reporter. Record promoter Paul Simon offers Keaton an opportunity for stardom in Los Angeles, a place Allen detests. Roberts sells out, in Allen’s eyes, by becoming a big TV star. Keaton takes up with Simon and Allen fails at a reconciliation. Later, the two ex-lovers meet in New York and part friends.