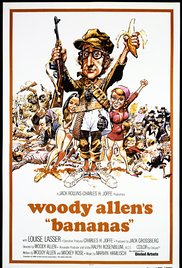 Woody Allen has a job demonstrating a physical fitness machine for business executives in a New York City firm. One night Louise Lasser a comely City College co-ed, comes by his apartment to enlist his support for a political cause. The two start dating and eventually become involved with each other.

Inexplicably Lasser breaks off the affair. Heartbroken, Woody goes on vacation to the Latin American Republic of San Marcos which is in the midst of political turmoil, its president having been assassinated at the picture's start (an event covered by TV sportscaster Howard Cosell). After inviting a puzzled Woody to dinner, dictator Carlos Montalban attempts to kill him the next day and pin the crime on the guerillas led by Jacobo Morales. The revolutionaries rescue Allen and soon he is one of their leaders in their successful revolution.

When Morales becomes insane, Woody finds himself president of San Marcos and goes to America to get foreign aid. He meets Lasser and the two are reconciled. Disturbed by his political tendencies, the authorities arrest him on-trumped. After a surreal trial, he's released, marries Lasser and consummates their union in front of Howard Cosell and a television audience.