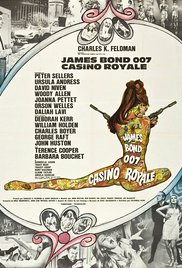 The power of SMERSH is growing to such proportions that the heads of the British, French, American and Russian secret services get together to see what can be done about it. Their solution is to force agent James Bond, now Sir James Bond, out of retirement to deal with the situation. This they do by blowing up his country house; in the bombardment "M" is killed. Bond's first duty is to console ''M's" widow in Scotland, "M" proving to be McTarr of the Glen. McTarry's own family is replaced by a band of SMERSH agents, with the intention of sullying the fair name of Bond, hitherto incorruptible. But Bond enchants "Lady Fiona" (Agent Mimi) and escapes the murderous intentions of her "daughters".

Back in London, Bond decides to designate all agents "James Bond" or "007'' to confuse the enemy. He reaches an agreement with Vesper Lynd, the richest spy in the world, and sets her to seduce Evelyn Tremble, inventor of a fool-proof system for winning at baccarat. Others co-opted at this time include Cooper, a muscle- man, and Bond's daughter, Mata Bond, his child by Mata Hari. Mata Bond goes to Berlin, foils an attempt by SMERSH to extract money from the major powers, and returns. Bond's plans for Tremble are put into effect when he and Vesper go to the Casino Royale so that he can beat Le Chiffre at baccarat and thus prevent SMERSH's attempts to replenish their finances at the tables.

Tremble wins, but Vesper is kidnapped as they leave. Following her, he is captured and tortured, and finally shot by Vesper. All seems to be over, but there is still the fiendish Doctor Noah. Mata Bond is kidnapped in a flying saucer, and Sir James sets out in pursuit. The trail leads to the Casino, which proves to be a front for Noah's secret headquarters. Noah himself turns out to be Jimmy Bond, Bond's scapegrace nephew. Bond and his secret weapon against Noah, the glamorous "Detainer", manage to rescue Mata and Cooper, and get as far as the Casino. They are followed by Noah, whom the Detainer has fed an explosive capsule, and in the end everyone is blown up, along with the Casino.