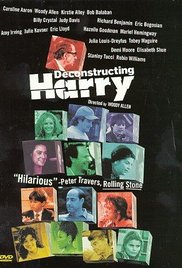 DECONSTRUCTING HARRY is a 1997 comedy film written and directed by Woody Allen. This film tells the story of a successful writer named Harry Block, played by Allen, who draws inspiration from people he knows in real life, and from events that happened to him, sometimes causing these people to become alienated from him as a result.

The central plot features Block driving to a university from which he was once thrown out, in order to receive an honorary degree. Three passengers accompany him on the journey: a prostitute, a friend, and his son, whom he has kidnapped from his ex-wife. However, there are many flashbacks, segments taken from Block's writing, and interactions with his own fictional characters.

Courtesy of Wikipedia, The Free Encyclopedia - Deconstructing Harry(film) Article (as of December 1, 2017)