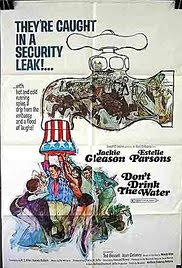 Aboard a jetliner enroute from Rome to Athens, Newark caterer Walter Hollander (Jackie Gleason), his wife Marion (Estelle Parsons) and daughter Susan (Joan Delaney) are under the impression that Greece is the last stop on their European tour. They don't know that the plane has been hijacked until the pilot announces an unscheduled top at Smetana, Vulgaria, behind the Iron Curtain. The passengers are told that they may leave the plane, provided they stay within the limits of the airport. Marion and Susan drag Walter off to take pictures.

Meanwhile, the U. S. Ambassador to Vulgaria, Magee (Howard St. John) has just been called to Washington, leaving his personable but inept son Axel (Ted Bessell) in charge of the Embassy.

Seen taking pictures in a restricted area, the Hollanders are pursued by Krojack (Michael Constantine), a Vulgarian intelligence officer, but are rescued by Axel who arrives on the scene in his official limousine and spirits them away. The Vulgarians follow in hot pursuit, convinced that the Hollanders are spies, but they reach sanctuary at the Embassy where Walter meets Father Drobney (Richard Libertini) who has been hiding there for six years.

Word comes from Washington that Ambassador Magee has arranged to exchange the Hollanders for a Vulgarian spy, the Grey Fox, but at Smetana. Airport, where the exchange is to takeplace, a message arrives that the Grey Fox has hanged himself, and Axel again rescues the hapless Americans from Krojack.

During the ensuing days at theEmbassy, Susan and Axel discover romance and Mirik (Mark Gordon), the local CIA man, comes to the rescue with an escape plan originally devised for Father Drobney six years ago: the Hollanders and Drobney are provided with passports identifying them as the Randall family, with Susan portraying a son! Leaving the Embassy, the group barely escapes Krojack and Ambassador Magee, who has just returned from Washington. They have worked out a "face-saving" deal for themselves whereby the Hollanderswill receive a heavy sentence, which will be reduced to 30 days through the "intervention" of the Ambassador. This is out of the question. Walter must get home to Newark.

Evading their pursuers, Axel, Father Drobney and the Hollanders arrive at a hotel, where Axel forces a visiting potentate, the Sultan of Bashir (Avery McShreiber) to relinquish his and his four wives' flowing robes and veils. Thus disguised, they imperiously march out of the hotel and take off in the Sultan's car.

Following a sign marked "Zorki Airport," they are dismayed to find only a dilapidated grey barn and a helicopter overhead already radioing their whereabouts to Krojack. They enter the barn and discover an old, dusty bi-plane, in the rear cockpit of which sits a little old World War 11 pilot who informs Father Drobney that he's about six years late! This is Zorki Airport. Since the plane can only carry three passengers, Axel solves the problem by proposing to Susan, and they are married on the spot by Father Drobney, thus providing Susan with diplomatic immunity in Vulgaria.

Krojack and the Ambassador arrive and watch, disappointed, as the ancient plane sputters into the air carrying Walter, Marion and Father Drobney back to Newark in a cloud of dust.