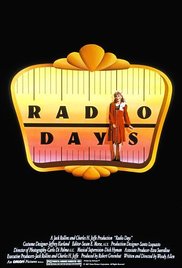 RADIO DAYS, the 15th film written and directed by Woody Allen, is a loving valentine to the days when radio reigned supreme in the reality of most Americans.

Set in Rockaway at the outset of World War II, RADIO DAYS invites the audience to partake in the hilarious yet moving adventures of a family, whose members triumph over a mundane existence by cultivating an intense fantasy life. Like Woody Allen's previous film, HANNAH AND HER SISTERS, this is also a family saga. The joys and tribulations experienced by all parents and children, uncles and aunts, neighbors and friends -- are universally recognizable: an unmarried aunt craves the company of a prince charming who remains ever-elusive; a wife lingers lovingly on the memory of a previous court- ship; a boy accepts the Masked Avenger, the famous radio character, as part and parcel of his daily life; a man believes his get rich schemes will bring him the success he...

RADIO DAYS also offers a glance at the active Manhattan night life, where the rich and beautiful rub elbows with other dreamers. Among the cigarette smoke, champagne and big band music, a charming but none-too- bright cigarette girl will become a radio personality, actually fulfilling her ambition.

RADIO DAYS, shot at the Kaufman-Astoria Studios in New York, paints an expansive, vivid canvas of the Big Apple at a time when innocence was still possible. It is a light-hearted, life-affirming evocation of an era, which could be considered a musical since it features the music of the legendary Tommy Dorsey, Artie Shaw and Glenn Miller, among others.