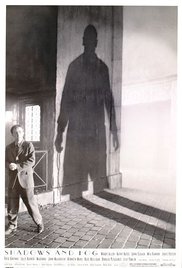 SHADOWS AND FOG, the twenty-first film written and directed by Woody Allen, traces the events surrounding the case of a mysterious strangler who begins to strike when the circus comes to town. This black and white comedy set in the 1920s has a large ensemble cast, including Allen, Kathy Bates, John Cusack, Mia Farrow, Jodie Foster, Julie Kavner, Madonna, John Malkovich, Kenneth Mars, Donald Pleasence and Lily Tomlin.

SHADOWS AND FOG incorporates many of the ideas and themes explored in Woody Allen's earlier films such as the conflict between good and evil, man's helplessness and the existential complexities of life. In SHADOWS AND FOG, Allen blends the comic and dramatic styles in which he has worked over the years to create a fascinating tapestry of intricately interwoven relationships, set against a dark and moody European setting.