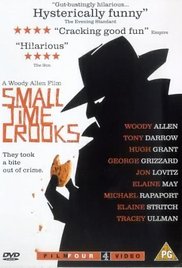 Ray and Frenchy Winkler's bank heist plans may have been a recipe for disaster. But the rise and fall of this half-baked batch of SMALL TIME CROOKS proved a delectable experience for filmmaker Woody Allen and his entire cast.

The story of the Winklers' master plan combined with the opportunity to work with Allen were the key ingredients that enticed such world-class comedic stars as Tracey Ullman, Hugh Grant and Elaine May. The film marks Ullman's third teaming with Allen, while it was the first time May and Grant had collaborated with the multiple Oscar-winning director, screenwriter and actor.

The set and costume stylings of Loquasto and McCabe showcase the garish essence of the nouveau riche in illustrating the lifestyle extremes between rich and poor-or in the case of the Winklers, the not-so-extremes when it comes to taste. Their story is about what getting rich quick really buys, which leads to the central themes of the movie: Be careful what you wish for; you may get it ... and money changes people.

"What I was going for was a funny movie," says Allen. "Although I guess you could say if there's a theme to the film, it might be 'be careful what you wish for."'

Conveying underlying meanings and making sure the comedy rings true through well-executed performances is why casting is a top priority in all of Allen's films. He is a master at finding the right mix of talent who can blend funny and tender in a seemingly effortless way.

Tracey Ullman remarks, "The interesting thing about Woody is that you don't have to audition because he knows who he wants for the part. It's not about having to be glamorous or having a history of big box office. It's about who's right, who's believable.

"I remember when I first came to America. I was pregnant and I would sit in my jacuzzi and watch all his films. I would say to myself, 'I must try to stick it out here on the chance that I might get to work with this guy.' And thank God I did, because I did get to work with him, and I got a Green Card."

Allen comments, "It was wonderful to work again with Tracey; she is a genius. In fact, I worked with two female geniuses in this film, Tracey and Elaine May. I hadn't really worked with Elaine before, but I have known her slightly for years, and she is one of the great talents."

Ullman wasn't the only one to snap up another opportunity to work with Allen. "This was my second film with Woody Allen and it was an honor to be asked back," says Michael Rapaport, who plays Ray Winkler's bank-robbing accomplice Denny. "When I did MIGHTY APHRODITE it was an amazing experience because Woody has a way of making you feel good about yourself as an actor. He treats you with respect and welcomes your input. This time, the experience was even better because I got to work with three more of the greatest comedic minds around, Tracey Ullman, Elaine May and Jon Lovitz."

Tony Darrow, who appears as Tommy, another member of the hapless bank robbery gang, has worked on six of Allen's films, including his latest, SWEET AND LOWDOWN. "I remember the first time I worked with him was on BULLETS OVER BROADWAY. I never saw the script," he says. "Woody said 'take a look at it but don't worry about it.' He wanted me to be spontaneous. I come from the street so I know what sounds real, and that's what he wants. He's a director who is comfortable enough with his own skills to let you improvise."

Completing the group of would-be bank robbers is Benny, played by Jon Lovitz, who notes, "Working with Woody Allen was a dream come true. I saw his first movie, TAKE THE MONEY AND RUN, when I was 13. That's when I decided to become a comedian."

For the role of David, Allen cast Hugh Grant, whose undeniable charm in romantic comedies like FOUR WEDDINGS AND A FUNERAL and the more recent hit NOTTING HILL, have made him an audience favorite. "He is a great comedian," Allen says. "His role required someone with an acute sense of timing, and he pulled it off perfectly."

After finishing a film like SWEET AND LOWDOWN with so many locations and intricate sets, producer Jean Doumanian says, "This one seemed to move so easily. It was a far less complicated picture, but I think it's because we have all worked together so long that we just seem to know one another's rhythms."

That was especially true in the case of production designer Santo Loquasto, who has worked with Allen on 20 films over the past two decades. He notes that the design was particularly challenging with regard to one set. "We used a beauty salon that had just been renovated, which we then converted into a pizza parlor in keeping with the story. So Sunset Cookies is a converted pizza parlor that was converted from a beauty salon," Loquasto laughs.

The basement of Sunset Cookies was turned into an indoor pond for the scene in which it is flooded when Ray and his inept band of marauders hit a water main trying to tunnel into the bank next door. For part of the day, Darrow, Lovitz and Rapaport were waist deep in water. Fortunately, the entire scene was shot in one day, sparing the actors and crew additional days of being waterlogged.

"The basement was actually the only set built for the film," recalls co-producer Helen Robin. "We had about 25,000 gallons of water pumped in from a tank next door. First we had to do the 'bursting' scene, when the water shoots through the wall and they use Tony Darrow's arm to try and plug the hole, which, of course, doesn't work. It was our big special effects. Actually, it was done very quickly and efficiently, so the actors were only in the water for about an hour."

Loquasto's personal favorite of the sets was the apartment of Hugh Grant's character, David. It was a turn-of-the-century old public school building in Little Italy and it outfitted beautifully for the character's art dealer look. "I made that one for me," Loquasto remarks. "The serpentine leather couch was a special touch."

The Winklers' tiny apartment was a working-class flat in Manhattan, but Loquasto notes, "The fun was when they struck it rich. It certainly expanded my imagination."

The interior of Ray and Frenchy's Park Avenue penthouse was actually filmed in a house in a neighboring New York suburb. Loquasto offers, "Everything was customized, literally made to order, like the bronze lilies cascading down the staircase. The harp and the grandfather's clock that had a column like a broken ruin were some of the better touches. Nothing was cheap, just sort of vulgar, over-the-top Art Nouveau, and, of course, the couple's new look had to match."

In keeping with their new status, the Winklers sport some rather distinctive wardrobe choices. Costume designer Suzanne McCabe chose primarily Versace knock-offs for Frenchy's makeover. Ullman admits that she loved her clothes, "especially those tight chartreuse pants... and it's worth the price of admission just to see Woody in those stone-washed denim shorts. "Between the interior design and wardrobe concoctions, the question remains: Who came up with the unique, sickly sweet flavor combinations offered at Sunset Cookies? "Me. I did it," confesses Allen, laughing. "That part was very enjoyable."