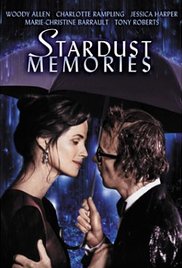 STARDUST MEMORIES is a 1980 American comedy-drama film written and directed by Woody Allen and starring himself, Charlotte Rampling, Jessica Harper, Marie-Christine Barrault and Sharon Stone in her film debut. The film is about a filmmaker who recalls his life and his loves - the inspirations for his films - while attending a retrospective of his work. The film is shot in black and white and is reminiscent of Federico Fellini's 8½ (1963), which it parodies.

The film follows famous filmmaker Sandy Bates, who is plagued by fans who prefer his "earlier, funnier movies" to his more recent artistic efforts, while he tries to reconcile his conflicting attraction to two very different women: the earnest intellectual Daisy and the more maternal Isobel. Meanwhile, he is also haunted by memories of his ex-girlfriend, the unstable Dorrie.

Courtesy of Wikipedia, The Free Encyclopedia - Stardust Memories Article (as of November 22, 2017)