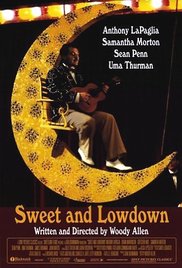 Woody Allen's film is the fanciful biography of a legendary jazz guitarist, Emmet Ray, who clashed with lovers, gangsters, musicians and success itself in the 1930's Jazz scene.

Sean Penn stars as the fictional musical genius who during the Swing Era was on his way up but could never settle down. Emmet forever stands in the shadow of his singular hero, the profoundly passionate Django Reinhardt.

Woody Allen's tale traverses the nightclubs, back alleys and train yards of the Swing Era jazz scene - yet was entirely filmed within an hour of Manhattan. Emmet Ray 's travels take him from New Jersey to Chicago, Detroit and even the bright lights of a Hollywood film studio - and took the production to some 85 period-dressed locations.

The experience began with Woody Allen's life-long love of jazz music. Although jazz themes have wended their way through the background of many of his prior films, SWEET AND LOWDOWN is a Jazz- age fable about an artist who captured both the renegade and bittersweet spirit of jazz. Allen conjured the fictional Emmet Ray from his imagination, but the character resembles a composite sketch of several real-life jazz artists - some of whom exhibited sublime virtuosity in their art but chaotic, comical foibles in their personal lives.

Appearing in cameo roles are a series of well-known jazz aficionados, including jazz critic Nat Hentoff, writer/director Douglas McGrath, and Woody Allen himself - all of whom provide anecdotes of Emmet's life and times, anecdotes that sometimes give different versions of the same events.

Woody Allen and his musical supervisor Dick Hyman chose the music for SWEET AND LOWDOWN in collaboration. It was Hyman who suggested virtuoso guitarist Howard Alden, considered one of the most versatile and masterful jazz guitar players at work today, to provide the music for Emmet Ray. The soundtrack, released by Sony Classical Records, also includes original recordings of Django Reinhardt, as well as violinist Joe Venuti and guitarist Eddie Lang, among others who made up the colorful jazz scene in the 1930s.