Take The Money and Run 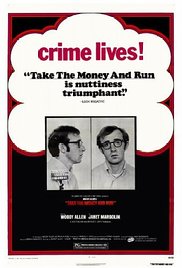 Virgil Starkwell (Woody Allen), born in the slums of Baltimore, will be known to police by five aliases before he is 25 years old.

A shortish, frail-looking kid with horn-rimmed glasses, Virgil is shy and likable, has a high IQ but resents authority and soon takes to crime (robbing gum-ball machines.)

At 18, Virgil is lonely and confused. Unable to concentrate in school, he has long dropped out. Despite his intelligence and above-average vocabulary, jobs are unavailable.

So, using a toy pistol, he sticks up an armored car and takes off with a sack of quarters which spill all over the street ashe runs. This caper lands him in the state prison, anarchic and poorly run institution which Virgil determines to leave as soon as possible.

After carving a pistol out of soap, he is compelling guards to lead him across the prison yard to the gates when a rainstorm reduces his "pistol" to a mass of soap bubbles. Two years are added to his sentence.

Volunteering to be used as a guinea pig for a dangerous medical experiment with vaccines, Virgil survives (after a temporary side-effect during which he is turned into a rabbi)and wins a parole.

But freedom doesn't mean a job, particularly now that he has a criminal record, so Virgil roams a park looking for a purse to snatch. There he meets Louise (Janet Margolin), a young and pretty laundress who likes to sketch during her lunch hour.

Instantly enamored, Virgil tells Louise he is a musician and invites her to dinner. That afternoon, he knocks over six vending machines in order to finance the meal at an elegant restaurant.

The two young people are soon involved in a love affair; and Virgil, destitute and determined to change his life with one bold stroke, attempts to rob a bank. But his flair for bungling lands him back in prison. He becomes a model prisoner, working in the laundry which is never the same again.

Louise visits him every week, but time moves too slowly for Virgil and he agrees to join other inmates in a crash-out. The escape attempt is cancelled at the last moment and no one notifies Virgil, leaving him suddenly in a very embarrassing position. For once his luck changes, however, when he finds the warden's daughter necking with an inmate. Using her as a hostage, Virgil gets away.

He and Louise flee to another state where they get married and live in a cheap flat, paid for from Louise's small savings. With Louise now pregnant, Virgil finally finds work in an office. It is his first decent job and he does well - until a sexy, predatory secretary, Miss Blair (Jackie Hyde), discovers that Virgil is a wanted criminal and begins blackmailing him.

Driven to desperation, Virgil tries to murder Miss Blair with dynamite, by shooting her, by running her down with an automobile and finally by stabbing her. He bungles every effort and flees again, but Virgil's bungled bank robbery efforts land him on a chain gang, Virgil and five of his fellow convicts risk a daring escape chained together. When they all make their way to Louise, they are free but hunted.

Does Virgil continue his life in crime? Does he succeed? Does he triumph over his adversaries? The answers are in the surprising climax of TAKE THE MONEY AND RUN.