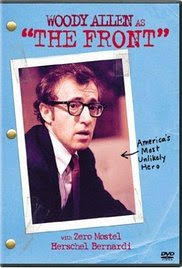 Howard Prince (Woody Allen), a New Yorker eking out a living running a neighborhood restaurant and placing bets on sporting events, receives a proposition from a boyhood friend who has been blacklisted from writing for television because of his political leanings. The writer, Alfred Miller (Michael Murphy) induces Howard to pose as Miller and submit his writing under Howard's nom de plume for a new television series for which Miller wrote the pilot script.

The premiere episode of "Joe Jupiter" is a hit, Sussman is elated, and Howard is asked to submit more scripts. Sussman is congratulated bynet-work officials and Howard is lionized at his neighborhood restaurant. Howard's mother is elated over the success of her son, the writer, and Florence enters into a love affair with him. Both Hecky and Howard, however, come under the scrutiny of government officials for their possible involvement with sub- versive activities and Hecky stands accused. The officials coerce Hecky, whose past activities have been questionable, to gain information on Howard's past.

Florence upbraids Howard for wasting his writing talents on television when the political issues of the time should have his attention and effort. She states that she is quitting the hypocrisy of television and that she will publish Howard's significant work and get it to the people. To accomplish his mission, Hecky induces Howard to accompany him to the mountains where Hecky has a week-end engagement as hotel entertainer. After a successful engagement, Hecky returns with Howard to Howard's apartment and probes his background, his relationship with Florence, and Florence's activities. Passionately, Hecky tells Howard that his alter ego, Brownstein (Hecky's real name) is haunting him and that his future is dim. When Howard awakens, Hecky is gone. He has thrown himself off a bridge.

Howard now is in charge of the staff of writers. Weekly, he doles out their paychecks at his restaurant and has set higher standards for their work, including that from Alfred Miller, "to protect my reputation with my name on the scripts.” He begs Florence, now an elevator operator in a department store to live with him, with the promise that he will write significant things for her. She rebuffs him in the belief that he merely wants her for a continuing bed partner.

Sussman then informs Howard that there is an imminent subpoena for Howard to appear before the House Un-American Activities Committee. A preliminary investigation discloses that they wish Howard to be a "friendly witness," and Howard is assured that he will have the best of legal counsel. In the hospital for a bleeding ulcer, Alfred warns Howard to be on his guard.

Seeking some sanctuary, Howard asks his mother to allow him to return home, but since it means sleeping on the sofa he turns to Florence for understanding and a place of comfort. He confesses to being the front for the show's writer, that he's a fraud and that he could not be implicated in anything important.

At the Congressional hearing, Howard is lauded. Then, in the questioning that follows, Howard agrees that his "fellow writers" could be subversives, but that he has no knowledge of it. Howard qualifies the suicide of "Brownstein," not Hecky Brown. He accuses the "system" of killing Hecky Brown. He defies the court and speaks his mind on pressure, coercion, persecution, fear and ulcers and assures the court that he will not equivocate. Marshals drag him from the courtroom, and a gratefully tearful Florence follows.

Now, obviously blacklisted as well, Howard takes a job in the department store to be near Florence. Sussman approaches him and they deplore the declining quality of the television show. Sussman wonders...could Howard get a front?