The Purple Rose of Cairo 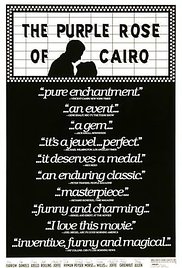 THE PURPLE ROSE OF CAIRO is a 1985 American romantic fantasy comedy film written and directed by Woody Allen, and starring Mia Farrow, Jeff Daniels, and Danny Aiello. Inspired by SHERLOCK JR., HELLZAPOPPIN', and Pirandello's SIX CHARACTERS IN SEARCH OF AN AUTHOR, it is the tale of a film character named Tom Baxter who leaves a fictional film of the same name and enters the real world.

Set in New Jersey during the Great Depression in 1935, the film tells the story of Cecilia (Mia Farrow), a clumsy waitress who goes to the movies to escape her bleak life and loveless, abusive marriage to Monk (Danny Aiello), whom she has attempted to leave on numerous occasions.

The latest film Cecilia sees is a fictitious RKO Radio Pictures film, The Purple Rose of Cairo. It is the story of a rich Manhattan playwright named Henry (Edward Herrmann) who goes on an exotic vacation to Egypt with companions Jason (John Wood) and Rita (Deborah Rush). While in Egypt, the three meet archaeologist Tom Baxter (Jeff Daniels). Tom is brought back for a "madcap Manhattan weekend" where he falls head-over-heels for Kitty Haynes (Karen Akers), a chanteuse at the Copacabana.

After Cecilia sits through the film several times, Tom, noticing her, breaks the fourth wall, and emerges from the black-and-white screen into the colorful real world on the other side of the cinema's screen. He tells Cecilia that he is attracted to her after noticing her watching him so many times, and she takes him around her New Jersey town. Later, he takes her into the film and they have a great evening on the town within the film. The two fall in love. But the character's defection from the film has caused some problems. In other copies of the film, others have tried to exit the screen. The producer of the film learns that Tom has left the film, and he flies cross-country to New Jersey with actor Gil...

But Gil's professions of love for Cecilia were false—he wooed her only to get Tom to return to the movie and thereby save his own Hollywood career. Gil abandons Cecilia and is seen quietly racked with guilt on his flight back to Hollywood. Having been left without a lover, job, or home, Cecilia ends up immersing herself in the frothy escapism of Hollywood once again, sitting in a theater watching Fred Astaire and Ginger Rogers dancing to "Cheek-to-Cheek" in the film TOP HAT, forgetting her dire situation and losing herself in the film.

Courtesy of Wikipedia, The Free Encyclopedia - The Purple Rose of Cairo Article (as of December 1, 2017)