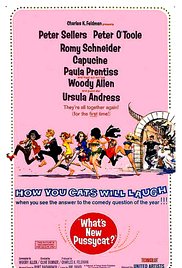 Too many beautiful women at the same time is the specialized problem of Michael James (Peter O' Toole) and he goes to Psychiatrist Fritz Fassbender (Peter Sellers) to see what he can do to straighten himself out. But the more the doctor hears of Mike’s conquest, the more powerful become his own amatory urges.

Mike’s “trouble” is destroying his romance with his fiancée Carol (Romy Schneider) but he cannot bring himself to give up the girls in his life. His pal Victor (Woody Allen) has girl trouble, too. His trouble is that he can’t find any even though he’s an “undresser” in a strip-tease place.

Carol finally tells Mike they’ll have to get married or the romance is off. This jars him. While visiting Victor, however, he sees and falls for Liz (Paula Prentiss) a gorgeous stripper.. But when it turns out that all she wants to do is read him some poetry of her own manufacture, it’s off. His next fling is with the exotic Renee (Capucine), man-crazy and dangerous.

Carol now decides to romance Victor in order to get Mike jealous. Mike tries to palm Renee off on Fritz in order to get rid of her and this leads to some hilarious consequences. There is a third involvement with a mad parachute jumper, Rita (Ursula Andress).

Things work up to a furious pace when Carol’s parents visit her and they are immediately embroiled in all this plotting and counter-plotting. The action switches to a “discreet” place in the country and here, in a fast-moving series of events, everything is finally resolved in as hilarious a climax as has ever graced a French farce.