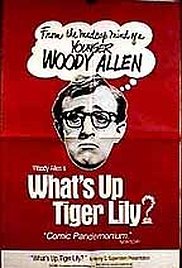 "WHAT'S UP, TIGER LILY?" is a 1966 American comedy film directed by Woody Allen in his feature-length directorial debut.

Allen took a Japanese spy film, INTERNATIONAL SECRET POLICE: KEY OF KEYS, and overdubbed it with completely original dialogue that had nothing to do with the plot of the original film. By putting in new scenes and rearranging the order of existing scenes, he completely changed the tone of the film from a James Bond clone into a comedy about the search for the world's best egg salad recipe.

The plot provides the setup for a string of sight gags, puns, jokes based on Asian stereotypes, and general farce. The central plot involves the misadventures of secret agent Phil Moskowitz, hired by the Grand Exalted High Majah of Raspur ("a nonexistent but real-sounding country") to find a secret egg salad recipe that was stolen from him.

Courtesy of Wikipedia, The Free Encyclopedia - What's Up, Tiger Lily? Article (as of November 22, 2017)